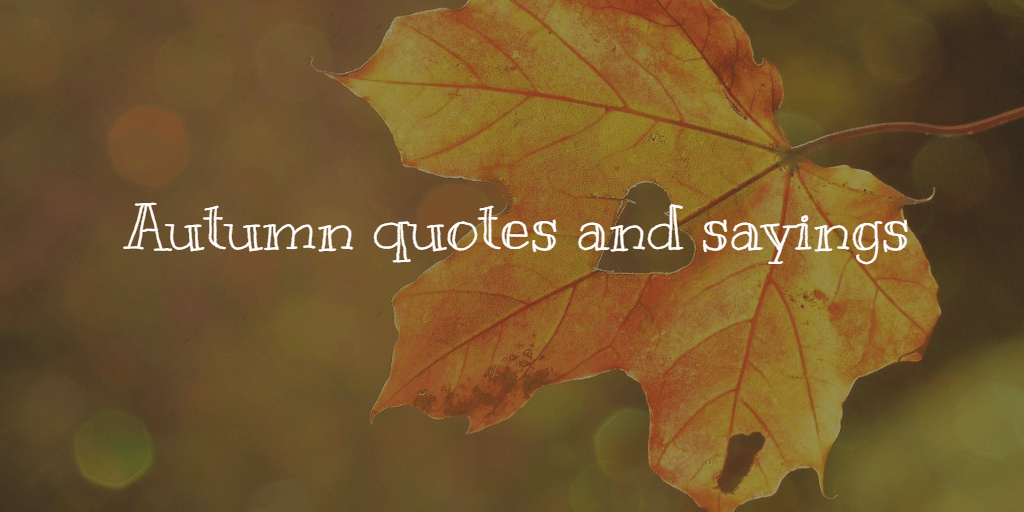 Autumn is a second spring when every leaf is a flower.
Albert Camus

The foliage has been losing its freshness through the month of August, and here and there a yellow leaf shows itself like the first gray hair amidst the locks of a beauty who has seen one season too many.
Oliver Wendell Holmes

I cannot endure to waste anything as precious as autumn sunshine by staying in the house. So I spend almost all the daylight hours in the open air.
Nathaniel Hawthorne

Autumn is a season followed immediately by looking forward to spring.
Doug Larson

For man, autumn is a time of harvest, of gathering together. For nature, it is a time of sowing, of scattering abroad.
Edwin Way Teale

The Autumn is old; The sere leaves are flying; He hath gather’d up gold, And now he is dying;– Old age, begin sighing!
Thomas Hood

The teeming Autumn big with rich increase, bearing the wanton burden of the prime like widowed wombs after their lords decease.
William Shakespeare

No man can taste the fruits of autumn while he is delighting his scent with the flowers of spring.”
Samuel Johnson

Autumn wins you best by this, its mute Appeal to sympathy for its decay.

It was one of those perfect English autumnal days which occur more frequently in memory than in life.
P.D. James

Nothing is more fleeting than external form, which withers and alters like the flowers of the field at the appearance of autumn.
Umberto Eco

Delicious autumn! My very soul is wedded to it, and if I were a bird I would fly about the earth seeking the successive autumns.
George Eliot

The spring, the summer, The chilling autumn, angry winter, change Their wonted liveries; and the mazed world By their increase, now knows not which is which.

Unless a tree has borne blossoms in spring, you will vainly look for fruit on it in autumn.
Sir Walter Scott

If you do not sow in the spring you will not reap in the autumn.”
Irish Proverb

Autumn Into earth’s lap does throw Brown apples gay in a game of play, As the equinoctials blow.
Dinah Maria Mulock

No shade, no shine, no butterflies, no bees, No fruits, no flowers, no leaves, no birds – November!

Summer ends, and Autumn comes, and he who would have it otherwise would have high tide always and a full moon every night.
Hal Borland

Winter is an etching, spring a watercolor, summer an oil painting and autumn a mosaic of them all.
Stanley Horowitz

Earth’s crammed with heaven, And every common bush afire with God; And only he who sees takes off his shoes; The rest sit round it and pluck blackberries.
Elizabeth Barrett Browning

There is a harmony In autumn, and a lustre in its sky, Which through the summer is not heard or seen, As if it could not be, as if it had not been!

O Autumn, laden with fruit, and stained With the blood of the grape, pass not, but sit Beneath my shady roof; there thou mayest rest And tune thy jolly voice to my fresh pipe, And all the daughters of the year shall dance! Sing now the lusty song of fruits and flowers.
William Blake

This sunlight shames November where he grieves In dead red leaves, and will not let him shun The day, though bough with bough be overrun. But with a blessing every glade receives High salutation.
Dante Gabriel Rossetti

Fiery colors begin their yearly conquest of the hills, propelled by the autumn winds. Fall is the artist.
Takayuki Ikkaku

Now Autumn’s fire burns slowly along the woods And day by day the dead leaves fall and melt.

A wind has blown the rain away and blown the sky away and all the leaves away, and the trees stand. I think, I too, have known autumn too long.
E. E. Cummings

Thus sung the shepherds till th’ approach of night, The skies yet blushing with departing light, When falling dews with spangles deck’d the glade, And the low sun had lengthened every shade.
Alexander Pope

Autumn burned brightly, a running flame through the mountains, a torch flung to the trees.
Faith Baldwin

October is a symphony of permanence and change.
Bonaro W. Overstreet

I trust in nature for the stable laws of beauty and utility. Spring shall plant and autumn garner to the end of time.
Robert Browning

Every leaf speaks bliss to me, fluttering from the autumn tree
Emily Bronte

I trust in Nature for the stable laws Of beauty and utility. Spring shall plant And Autumn garner to the end of time.
Robert Browning

No spring nor summer beauty hath such grace As I have seen in one autumnal face.
John Donne

Youth is like spring, an over praised season more remarkable for biting winds than genial breezes. Autumn is the mellower season, and what we lose in flowers we more than gain in fruits.
Samuel Butler

The mellow autumn came, and with it came The promised party, to enjoy its sweets. The corn is cut, the manor full of game; The pointer ranges, and the sportsman beats In russet jacket;–lynx-like is his aim; Full grows his bag, and wonderful his feats. An, nutbrown partridges! An, brilliant pheasants! And ah, ye poachers!–‘Tis no sport for peasants.
Lord Byron

Everyone must take time to sit and watch the leaves turn.
Elizabeth Lawrence