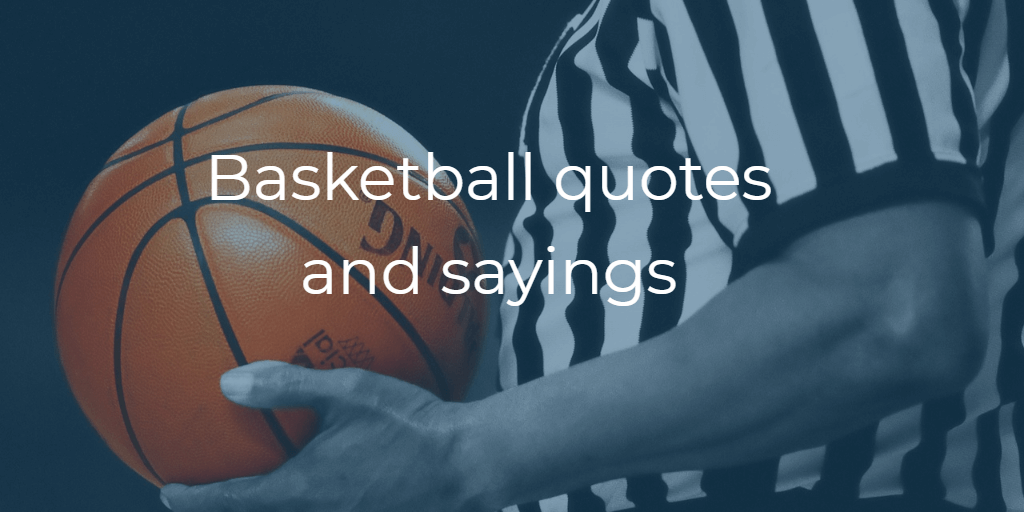 Basketball is like war in that offensive weapons are developed first, and it always takes a while for the defense to catch up.
Red Auerbach

Never underestimate the heart of a champion.
Rudy Tomjanovich

The invention of basketball was not an accident. It was developed to meet a need. Those boys simply would not play “Drop the Handkerchief.
James Naismith

This is the second most exciting indoor sport, and the other one shouldn’t have spectators.
Dick Vertleib

There are really only two plays: Romeo and Juliet, and put the darn ball in the basket.
Abe Lemons

The rule was “No autopsy, no foul.
Stewart Granger

Everybody pulls for David, nobody roots for Goliath.
Wilt Chamberlain

When it’s played the way is spozed to be played, basketball happens in the air; flying, floating, elevated above the floor, levitating the way oppressed peoples of this earth imagine themselves in their dreams.
John Edgar Wideman

I haven’t been able to slam-dunk the basketball for the past five years. Or, for the thirty-eight years before that, either.
Dave Barry

I look at the NBA as a football game without the helmet.
Tom Tolbert

To win, you’ve got to put the ball in the macrame.
Terry McGuire

If you meet the Buddha in the lane, feed him the ball.
Phil Jackson

Nothing there but basketball, a game which won’t be fit for people until they set the basket umbilicus-high and return the giraffes to the zoo.
Ogden Nash

What is so fascinating about sitting around watching a bunch of pituitary cases stuff a ball through a hoop?
Woody Allen

Sometimes a player’s greatest challenge is coming to grips with his role on the team.
Scottie Pippen

These Liberty girls, they don’t have sex, but you can always play in the mud!!
John Swickrath

We have a great bunch of outside shooters. Unfortunately, all our games are played indoors.
Weldon Drew

Basketball is the MTV of sports.
Sara Levinson

If I weren’t earning $3 million a year to dunk a basketball, most people on the street would run in the other direction if they saw me coming.
Charles Barkley

Basketball is like photography, if you don’t focus, all you have is the negative.
Dan Frisby

I hate it. It looks like a stickup at 7-Eleven. Five guys standing there with their hands in the air.
Norm Sloan

Fans never fall asleep at our games, because they’re afraid they might get hit by a pass.
George Raveling

The only difference between a good shot and a bad shot is if it goes in or not.
Charles Barkley

Any American boy can be a basketball star if he grows up, up, up.
Bill Vaughn

When I dunk, I put something on it. I want the ball to hit the floor before I do.
Darryl Dawkins

If my primary purpose here at Indiana is to go out and win ballgames, I can probably do that as well as anybody can. I would just cheat, get some money from alot of people around Indianapolis who want to run the operation that way, and just go out and get the best basketball players I can. Then we’d beat everybody.
Bobby Knight

They say that nobody is perfect. Then they tell you practice makes perfect. I wish they’d make up their minds.
Wilt Chamberlain

If all I’m remembered for is being a good basketball player, then I’ve done a bad job with the rest of my life.
Isiah Thomas

When I went to Catholic high school in Philadelphia, we just had one coach for football and basketball. He took all of us who turned out and had us run through a forest. The ones who ran into the trees were on the football team.
George Raveling

You can run a lot of plays when your X is twice as big as the other guys’ O. It makes your X’s and O’s pretty good.
Paul Westphal

Giving “Magic” the basketball is like giving Hitler an army, Jesse James a gang, or Genghis Khan a horse.
Jim Murray

Basketball teams, after the perfunctory lay-up drill, fall into the crowded isolation and personal style of 10 city kids shooting at the same basket or playing one-on-one.
Ted Solotaroff

My responsibility is getting all my players playing for the name on the front of the jersey, not the one on the back.
Anonymous

The secret is to have eight great players and four others who will cheer like crazy.
Jerry Tarkanian

As far as carrying the torch for the years to come, I don’t know. I just want to be the best basketball player I can be.
Kobe Bryant