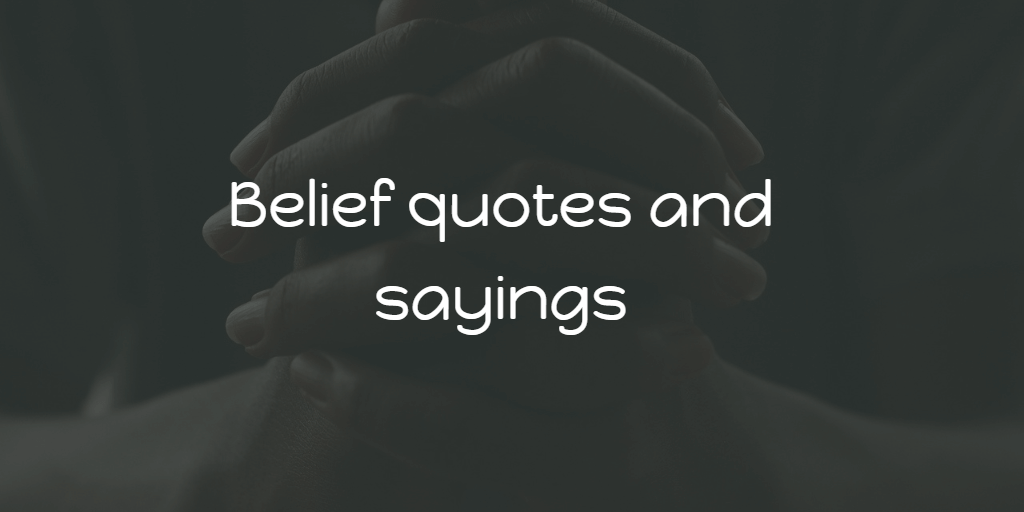 Keep your dreams alive. Understand to achieve anything requires faith and belief in yourself, vision, hard work, determination, and dedication. Remember all things are possible for those who believe.
Gail Devers

If you wish others to believe in you, you must first convince them that you believe in them.
Harvey MacKay

Men often become what they believe themselves to be. If I believe I cannot do something, it makes me incapable of doing it. But when I believe I can, then I acquire the ability to do it even if I didn’t have it in the beginning.
Mahatma Gandhi

I can believe anything, provided that it is quite incredible.
Oscar Wilde

The weaker the intellect, the stronger the belief.
James Dee Richardson

The belief that there is only one truth, and that oneself is in possession of it, is the root of all evil in the world.
Max Born

The outer conditions of a person’s life will always be found to reflect their inner beliefs.
James Allen

Along with a strong belief in your own inner voice, you also need laser-like focus combined with unwavering determination.
Larry Flynt

It is easier to believe than to doubt.
E.D. Martin

To be a champ, you have to believe in yourself when nobody else will.
Sugar Ray Robinson

Believe deep down in your heart that you’re destined to do great things.
Joe Paterno

Believe it or not.
R. L. Ripley

Believe and act as if it were impossible to fail.
Charles F. Kettering

Live your beliefs and you can turn the world around.
Henry David Thoreau

Faith is not belief. Belief is passive. Faith is active.
Edith Hamilton

Faith is not belief without proof, but trust without reservation.
Anonymous

The true believer is in a high degree protected against the danger of certain neurotic afflictions; by accepting the universal neurosis he is spared the task of forming a personal neurosis.
Sigmund Freud

What matters is not the idea a man holds, but the depth at which he holds it.
Ezra Pound

Nothing splendid has ever been achieved except by those who dared believe that something inside of them was superior to circumstances.
Bruce Barton

To accomplish great things, we must not only act, but also dream; not only plan, but also believe.
Anatole France

Any belief worth having must survive doubt
Anonymous

This is how humans are, we question all our beliefs, except for the ones we really believe, and those we never think to question.
Orson Scott Card

I believe because it is impossible.
Tertullian

Belief means not wanting to know what is true.
Friedrich Nietzsche

You can have anything you want if you will give up the belief that you can’t have it.
Dr. Robert Anthony

I have found that great people do have in common an immense belief in themselves and in their mission. They also have great determination as well as an ability to work hard. At the crucial moment of decision, they draw on their accumulated wisdom. Above all, they have integrity.
Yousuf Karsh

Believe in yourself.. in all you can do.. and for you, the deals will start to work in your favor. You need to be open to such deals, and they will come, I assure you.
Ivana Trump

Every time you state what you want or believe, you’re the first to hear it. It’s a message to both you and others about what you think is possible. Don’t put a ceiling on yourself.
Oprah Winfrey

Far away there in the sunshine are my highest aspirations. I may not reach them, but I can look up and see their beauty, believe in them, and try to follow where they lead.
Louisa May Alcott

More than anything else, I believe it’s our decisions, not the conditions of our lives, that determine our destiny.
Anthony Robbins

Love what you do. Believe in your instincts. And you’d better be able to pick yourself up and brush yourself off every day.
Anonymous

I believe that every single event in life happens in an opportunity to choose love over fear.
Oprah Winfrey

It’s my belief we developed language because of our deep inner need to complain.
Lily Tomlin

We all have our own life to pursue, our own kind of dream to be weaving. And we all have the power to make wishes come true, as long as we keep believing.
Louisa May Alcott

These then are my last words to you. Be not afraid of life. Believe that life is worth living and your belief will help create the fact.
William James

In faith there is enough light for those who want to believe and enough shadows to blind those who don’t.
Blaise Pascal

In order to succeed, we must first believe that we can.
Michael Korda

Every man prefers belief to the exercise of judgment.
Seneca

Faith may be defined briefly as an illogical belief in the occurrence of the improbable.
Henry Louis Mencken

Every single life only becomes great when the individual sets upon a goal or goals which they really believe in, which they can really commit themselves to, which they can put their whole heart and soul into.
Brian Tracy

It is not bigotry to be certain we are right; but it is bigotry to be unable to imagine how we might possibly have gone wrong.
G. K. Chesterton

Your belief in God is merely an escape from your monotonous, stupid and cruel life.
Jiddu Krishnamurti

It is my belief, you cannot deal with the most serious things in the world unless you understand the most amusing.
Winston Churchill

Myths which are believed in tend to become true.
George Orwell

Within you right now is the power to do things you never dreamed possible. This power becomes available to you just as you can change your beliefs.
Anonymous

If you believe in what you are doing, then let nothing hold you up in your work. Much of the best work of the world has been done against seeming impossibilities. The thing is to get the work done.
Dale Carnegie

It is not disbelief that is dangerous to our society; it is belief.
George Bernard Shaw

One must marry one’s feelings to one’s beliefs and ideas. That is probably the only way to achieve a measure of harmony in one’s life.
Napoleon Hill

God is at home; it is we who have gone for a walk.
Meister Eckhart

If I have the belief that I can do it, I shall surely acquire the capacity to do it even if I may not have it at the beginning.
Mahatma Gandhi

Ignorance is preferable to error, and he is less remote from the truth who believes nothing than he who believes what is wrong.
Thomas Jefferson