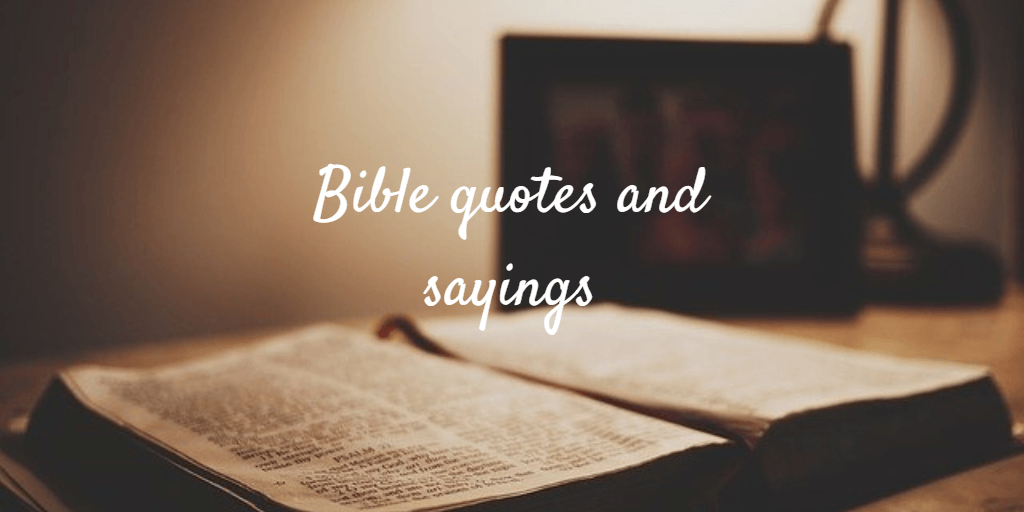 A feast is made for laughter, and wine maketh merry: but money answereth all things.
Ecclesiastes

A fountain of gardens, a well of living waters, and streams from Lebanon.
Song of Solomon

A woman when she is in travail hath sorrow, because her hour is come: but as soon as she is delivered of the child, she remembereth no more the anguish, for joy that a man is born into the world.
John 16:21

Abel was a keeper of sheep, but Cain was a tiller of the ground.
Genesis 4:2

Better is a poor and a wise child than an old and foolish king, who will no more be admonished.
Ecclesiastes 4:13

Afterward Jesus findeth him in the temple, and said unto him, Behold, thou art made whole: sin no more, lest a worse thing come unto thee.
John 5:14

Again, when the wicked man turneth away from his wickedness that he hath committed, and doeth that which is lawful and right, he shall save his soul alive.
Ezekiel 18:27

All the rivers run into the sea; yet the sea is not full; unto the place from whence the rivers come, thither they return again. All things are full of labour; man cannot utter it: the eye is not satisfied with seeing, nor the ear filled with hearing. The thing that hath been, it is that which shall be; and that which is done is that which shall be done: and there is no new thing under the sun.
Ecclesiastes 1:7-9

Answer a fool according to his folly, lest he be wise in his own conceit.
Proverbs 26:5

All we like sheep have gone astray; we have turned every one to his own way; and the Lord hath laid on him the iniquity of us all. He was oppressed, and he was afflicted, yet he opened not his mouth: he is brought as a lamb to the slaughter, and as a sheep before her shearers is dumb, so he openeth not his mouth.
Isaiah 53:6-7

Heaven and earth shall pass away, but my words shall not pass away.
Matthew 24:35

For the kingdom of God is not in word, but in power.
I Corinthians 4:20

And a certain man saw it, and told Joab, and said, Behold, I saw Absalom hanged in an oak.
II Samuel 18:10

ride goeth before destruction, and an haughty spirit before a fall.
Proverbs 16:18

As cold waters to a thirsty soul, so is good news from a far country.
Proverbs 25:25

And a very great multitude spread their garments in the way; others cut down branches from the trees, and strawed them in the way. And the multitudes that went before, and that followed, cried, saying, Hosanna to the Son of David: Blessed is he that cometh in the name of the Lord; Hosanna in the highest.
Matthew 21:8-9

And about the ninth hour Jesus cried with a loud voice, saying, Eli, Eli, lama sabachthani? that is to say, My God, my God, why hast thou forsaken me?
Matthew 27:46

And Abraham lifted up his eyes, and looked, and behold behind him a ram caught in a thicket by his horns: and Abraham went and took the ram, and offered him up for a burnt offering in the stead of his son.
Genesis 22:13

Beware of false prophets, which come to you in sheep’s clothing, but inwardly they are ravening wolves.
Matthew 7:15

He that is slow to anger is better than the mighty; and he that ruleth his spirit than he that taketh a city.
Proverbs 16:32

And Abraham said, My son, God will provide himself a lamb for a burnt offering: so they went both of them together.
Genesis 22:8

And all his sons and all his daughters rose up to comfort him; but he refused to be comforted; and he said, For I will go down into the grave unto my son mourning. Thus his father wept for him.
Genesis 37:35

And all the days of Methuselah were nine hundred sixty and nine years: and he died.
Genesis 5:27

And almost all things are by the law purged with blood; and without shedding of blood is no remission.
Hebrews 9:22

I am my beloved’s, and his desire is toward me.
Song of Solomon 7:10

No man also having drunk old wine straightway desireth new: for he saith, The old is better.
Luke 5:39

Honour all men. Love the brotherhood. Fear God. Honour the king.
I Peter 2:17

And as he journeyed, he came near Damascus: and suddenly there shined round about him a light from heaven: And he fell to the earth, and heard a voice saying unto him, Saul, Saul, why persecutest thou me? And he said, Who art thou, Lord? And the Lord said, I am Jesus whom thou persecutest: it is hard for thee to kick against the pricks.
Acts 9:3-5

And as they were eating, Jesus took bread, and blessed it, and brake it, and gave it to the disciples, and said, Take, eat; this is my body. And he took the cup, and gave thanks, and gave it to them, saying, Drink ye all of it; For this is my blood of the new testament, which is shed for many for the remission of sins.
Matthew 26:26-28

No mention shall be made of coral, or of pearls: for the price of wisdom is above rubies.
Job 28:18

And at midnight there was a cry made, Behold, the bridegroom cometh; go ye out to meet him. Then all those virgins arose, and trimmed their lamps. And the foolish said unto the wise, Give us of your oil; for our lamps are gone out.
Matthew 25:6-8

And before him shall be gathered all nations: and he shall separate them one from another, as a shepherd divideth his sheep from the goats: And he shall set the sheep on his right hand, but the goats on the left.
Matthew 25:32-33

And behold joy and gladness, slaying oxen, and killing sheep, eating flesh, and drinking wine: let us eat and drink; for tomorrow we shall die.
Isaiah 22:13

And besought him that they might only touch the hem of his garment: and as many as touched were made perfectly whole.
Matthew 14:36

And bring hither the fatted calf, and kill it; and let us eat, and be merry: For this my son was dead, and is alive again; he was lost, and is found. And they began to be merry.
Luke 15:23-24

And come hither, and I shall light a candle of understanding in thine heart, which shall not be put out, till the things be performed which thou shalt begin to write.
II Esdras 14:25

And forthwith he came to Jesus, and said, Hail, master; and kissed him. And Jesus said unto him, Friend, wherefore art thou come? Then came they, and laid hands on Jesus, and took him.
Matthew 26:49-50

And forthwith Jesus gave them leave. And the unclean spirits went out, and entered into the swine: and the herd ran violently down a steep place into the sea, (they were about two thousand;) and were choked in the sea.
Mark 5:13

And further, by these, my son, be admonished: of making many books there is no end; and much study is a weariness of the flesh.
Ecclesiastes 12:12

And God called the dry land Earth; and the gathering together of the waters called he Seas: and God saw that it was good. And God said, Let the earth bring forth grass, the herb yielding seed, and the fruit tree yielding fruit after his kind, whose seed is in itself, upon the earth: and it was so.
Genesis 1:10-11

And God said unto Moses, I AM THAT I AM: and he said, Thus shalt thou say unto the children of Israel, I AM hath sent me unto you.
Exodus 3:14

And God said, Let the earth bring forth the living creature after his kind, cattle, and creeping thing, and beast of the earth after his kind: and it was so.
Genesis 1:24

And he answered and said, He that dippeth his hand with me in the dish, the same shall betray me. The Son of man goeth as it is written of him: but woe unto that man by whom the Son of man is betrayed! it had been good for that man if he had not been born. Then Judas, which betrayed him, answered and said, Master, is it I? He said unto him, Thou hast said.
Matthew 26:23-25

And he answered and said unto them, I tell you that, if these should hold their peace, the stones would immediately cry out.
Luke 19:40

And he asked him, What is thy name? And he answered, saying. My name is Legion: for we are many.
Mark 5:9

And he dreamed, and behold a ladder set up on the earth, and the top of it reached to heaven: and behold the angels of God ascending and descending on it.
Genesis 28:12

And he received them at their hand, and fashioned it with a graving tool, after he had made it a molten calf: and they said, These be thy gods, O Israel, which brought thee up out of the land of Egypt.
Exodus 32:4

And he said to the woman, Thy faith hath saved thee; go in peace.
Luke 7:50

And he said unto them, Ye will surely say unto me this proverb, Physician, heal thyself: whatsoever we have heard done in Capernaum, do also here in thy country.
Luke 4:23

And he said unto them, Out of the eater came forth meat, and out of the strong came forth sweetness. And they could not in three days expound the riddle.
Judges 14:14

And he said unto them, Go ye into all the world, and preach the gospel to every creature.
Mark 16:15

And he said unto them, The sabbath was made for man, and not man for the sabbath: Therefore the Son of man is Lord also of the sabbath.
Mark 2:27-28

And he said, He that shewed mercy on him. Then said Jesus unto him, Go, and do thou likewise.
Luke 10:37

And he said, I heard thy voice in the garden, and I was afraid, because I was naked; and I hid myself. And he said, Who told thee that thou wast naked?
Genesis 3:10-11