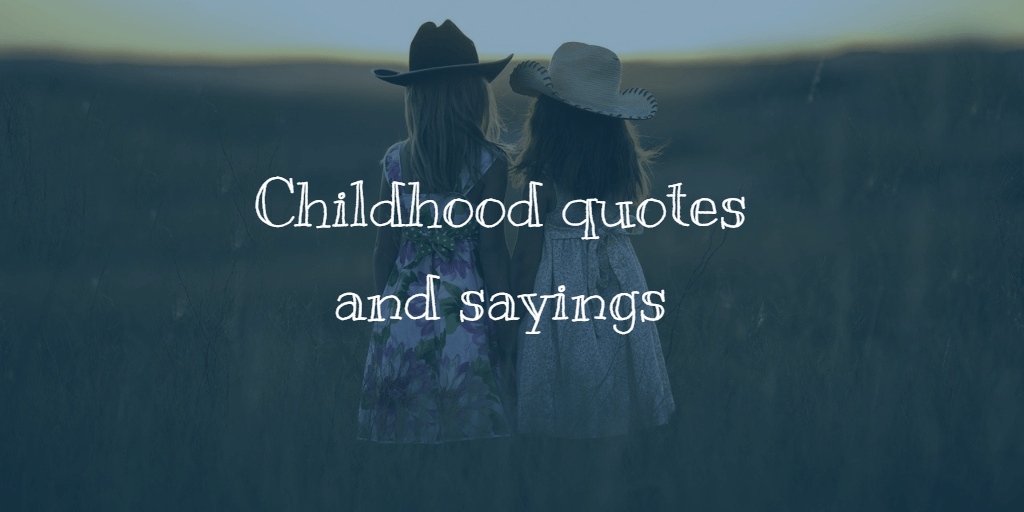 If you carry your childhood with you, you never become older.
Tom Stoppard

It is never too late to have a happy childhood.
Tom Robbins

Childhood is not from birth to a certain age and at a certain age / The child is grown, and puts away childish things. / Childhood is the kingdom where nobody dies. / Nobody that matters, that is.
Edna St. Vincent Millay

You’re never too old to have a happy childhood.
Anonymous

When you finally go back to your old hometown, you find it wasn’t the old home you missed but your childhood.
Sam Ewing

Our whole life is but a greater and longer childhood.
Benjamin Franklin

There are perhaps no days of our childhood we lived so fully as those we spent with a favorite book.
Marcel Proust

The childhood shows the man, as morning shows the day.
John Milton

Childhood is a promise that is never kept.
Ken Hill

Childhood is that wonderful time of life when all you need to do to lose weight is take a bath.
Richard Zera

Childhood is the sleep of reason.
Jean-Jacques Rousseau

We have not passed that subtle line between childhood and adulthood until… we have stopped saying “It got lost, and say “I lost it.”
Sydney J. Harris

Arguably, no artist grows up: If he sheds the perceptions of childhood, he ceases being an artist.
Ned Rorem

Sweet childish days, that were as long As twenty days are now.
William Wordsworth

My childhood was a period of waiting for the moment when I could send everyone and everything connected with it to hell.
Igor Stravinsky

Childhood is measured out by sounds and smells and sights, before the dark hour of reason grows.
John Betjeman

The son whines to his father, “You messed up my childhood!” And the father says, “How could I, son? I wasn’t even there.”
Anonymous

Childhood is the fiery furnace in which we are melted down to essentials and that essential shaped for good.
Katherine Anne Porter

I cannot think of any need in childhood as strong as the need for a father’s protection.
Sigmund Freud

There is always one moment in childhood when the door opens and lets the future in.
Deepak Chopra

Childhood is the most beautiful of all life’s seasons.
Anonymous

Childhood: the period of human life intermediate between the idiocy of infancy and the folly of youth : two removes from the sin of manhood and three from the remorse of age.
Ambrose Bierce

Childhood is not only the childhood we really had but also the impressions we formed of it in our adolescence and maturity. That is why childhood seems so long. Probably every period of life is multiplied by our reflections upon the next.
Cesare Pavese

There is a garden in every childhood, an enchanted place where colors are brighter, the air softer, and the morning more fragrant than ever again.
Elizabeth Lawrence

Childhood is frequently a solemn business for those inside it.
George F. Will

I never really had a childhood. I was around adults all the time. My favorite book when I was eight was Everything You Always Wanted to Know About Sex – But Were Afraid to Ask. I was not afraid to ask.
Drew Barrymore

Tis not a life, ‘Tis but a piece of childhood thrown away.
Francis Beaumont and John Fletcher

There is no absurdity so obvious that it cannot be firmly planted in the human head if you only begin to impose it before the age of five, by constantly repeating it with an air of great solemnity.
Arthur Schopenhauer

When childhood dies, its corpses are called adults and they enter society, one of the politer names of hell. That is why we dread children, even if we love them, they show us the state of our decay.
Brian W. Aldiss

The older I grow the more earnestly I feel that the few joys of childhood are the best that life has to give.
Ellen Glasgow

We could never have loved the earth so well if we had had no childhood in it.
George Eliot

Some men have a necessity to be mean, as if they were exercising a faculty which they had to partially neglect since early childhood.
Anonymous

When I was a child there were many witches, and they bewitched both cattle and men, especially children.
Martin Luther

The highlight of my childhood was making my brother laugh so hard that food came out of his nose.
Garrison Keillo

Religion is comparable to a childhood neurosis.
Sigmund Freud

He carried his childhood like a hurt warm bird held to his middle-aged breast.
Herbert Gold

Creativity is not merely the innocent spontaneity of our youth and childhood; it must also be married to the passion of the adult human being, which is a passion to live beyond one’s death.”
Dr. Rollo May

All those writers who write about their childhood! Gentle God, if I wrote about mine you wouldn’t sit in the same room with me.
Dorothy Parke

The essence of childhood, of course, is play, which my friends and I did endlessly on streets that we reluctantly shared with traffic.
Bill Cosby

Nothing is more memorable than a smell. One scent can be unexpected, momentary and fleeting, yet conjure up a childhood summer beside a lake in the mountains…
Diane Ackerman

There must be a law against forcing children to perform at an early age. Children should have a wonderful childhood. They should not be given too much responsibility.
Maria Calla

We plan our lives according to a dream that came to us in our childhood, and we find that life alters our plans. And yet, at the end, from a rare height, we also see that our dream was our fate. It’s just that providence had other ideas as to how we would get there. Destiny plans a different route, or turns the dream around, as if it were a riddle, and fulfills the dream in ways we couldn’t have expected.
Ben Okri

The things which the child loves remain in the domain of the heart until old age. The most beautiful thing in life is that our souls remaining over the places where we once enjoyed ourselves.
Kahlil Gibran

I was coming home from kindergarten – well they told me it was kindergarten. I found out later I had been working in a factory for ten years. It’s good for a kid to know how to make gloves.
Ellen DeGeneres

Happy, happy Christmas, that can win us back to the delusions of our childhood days, recall to the old man the pleasures of his youth, and transport the traveller back to his own fireside and quiet home!
Charles Dickens