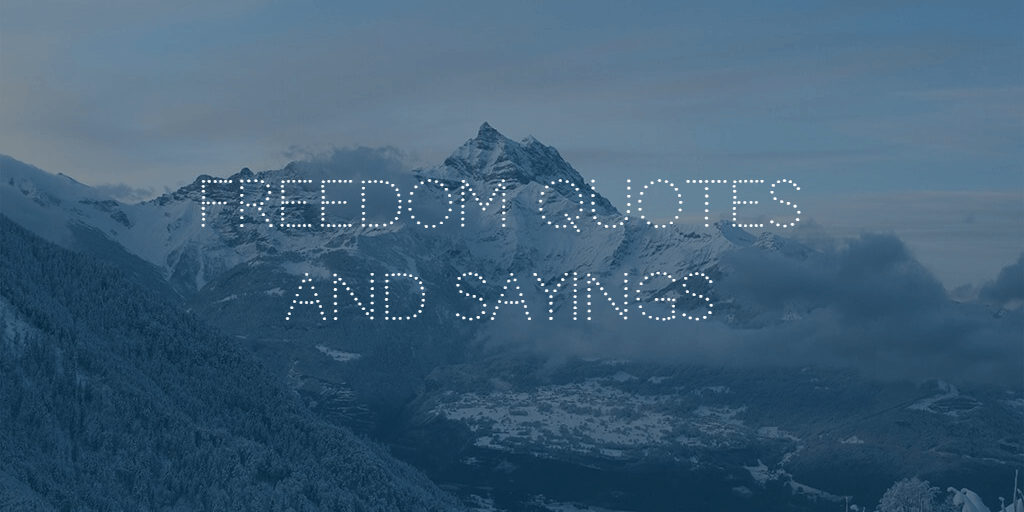 No one should negotiate their dreams. Dreams must be free to flee and fly high. No government, no legislature, has a right to limit your dreams. You should never agree to surrender your dreams.
Jesse Jackson

I believe there are more instances of the abridgment of the freedom of the people by gradual and silent encroachments of those in power than by violent and sudden usurpations.
James Madison

It is by the goodness of God that in our country we have those three unspeakably precious things: freedom of speech, freedom of conscience, and the prudence never to practice either of them.
Mark Twain

Man is condemned to be free.
Jean Paul Sartre

Your true traveller finds boredom rather agreeable than painful. It is the symbol of his liberty – his excessive freedom. He accepts his boredom, when it comes, not merely philosophically, but almost with pleasure.
Aldous Huxley

Your life is the sum result of all the choices you make, both consciously and unconsciously. If you can control the process of choosing, you can take control of all aspects of your life. You can find the freedom that comes from being in charge of yourself.
Robert F. Bennet

The First Amendment is often inconvenient. But that is besides the point. Inconvenience does not absolve the government of its obligation to tolerate speech.
Justice Anthony Kennedy

Every human has four endowments- self awareness, conscience, independent will and creative imagination. These give us the ultimate human freedom… The power to choose, to respond, to change.
Stephen R. Covey

History does not long entrust the care of freedom to the weak or the timid.
Dwight D. Eisenhower

The highest pleasure to be got out of freedom, and having nothing to do, is labor.
Mark Twain

Human history begins with man’s act of disobedience which is at the very same time the beginning of his freedom and development of his reason.
Erich Fromm

I know not what course others may take; but as for me, give me liberty or give me death.
Patrick Henry

That’s free enterprise, friends: freedom to gamble, freedom to lose. And the great thing — the truly democratic thing about it — is that you don’t even have to be a player to lose.
Barbara Ehrenreich

You took my freedom away a long time ago and you can’t give it back because you haven’t got it yourself.
Alexander Solzhenitsyn

The shepherd drives the wolf from the sheep’s throat, for which the sheep thanks the shepherd as his liberator, while the wolf denounces him for the same act, as the destroyer of liberty. Plainly the sheep and the wolf are not agreed upon a definition of the word liberty; and precisely the same difference prevails today among human creatures.
Abraham Lincoln (Attributed)

None are so hopelessly enslaved as those who falsely believe they are free.
Johann Wolfgang von Goethe

In their rules there was only one clause: Do what you will.
François Rabelais

It’s often safer to be in chains than to be free.
Franz Kafka

Without general elections, without unrestrictedfreedom of press and assembly, without a free struggle of opinion, life dies out in every public institution, becomes a mere semblance of life, in which only the bureaucracy remains as the active element.
Rosa Luxemburg

No man can put a chain about the ankle of his fellow man without at last finding the other end fastened about his own neck.
Frederick Douglass

O Freedom, what liberties are taken in thy name!
Daniel George

Emancipate yourselves from mental slavery. None but ourselves can free our minds.

The greatest dangers to liberty lurk in insidious encroachment by men of zeal, well-meaning but without understanding.
Louis D. Brandeis

There is a wonderful mythical law of nature that the three things we crave most in life — happiness, freedom, and peace of mind — are always attained by giving them to someone else.
Peyton Conway March

Every tyrant who has lived has believed in freedom – for himself.
Elbert Hubbard

We have a natural right to make use of our pens as of our tongues, at our peril, risk and hazard.
Voltaire

Before the organization of the Blackshirt movement free speech did not exist in this country.
Oswald Mosley

Power is so apt to be insolent and Liberty to be saucy, that they are seldom upon good Terms.
Lord Halifax

My people and I have come to an agreement which satisfies us both. They are to say what they please, and I am to do what I please.
Frederick the Great

So free we seem, so fettered fast we are!
Robert Browning

Forgiveness is the key to action and freedom.
Hannah Arendt

My policy is to be able to take a ticket at Victoria Station and go anywhere I damn well please.
Ernest Bevin

England may as well dam up the waters from the Nile with bulrushes as to fetter the step of Freedom, more proud and firm in this youthful land.
Lydia M. Child

Conscience, I say, not thine own, but of the other: for why is my liberty judged of another man’s conscience?
Bible: I Corinthians

I prefer liberty with danger to peace with slavery.
Anonymous

The freedom to make a fortune on the stock exchange has been made to sound more alluring than freedom of speech.
John Mortimer