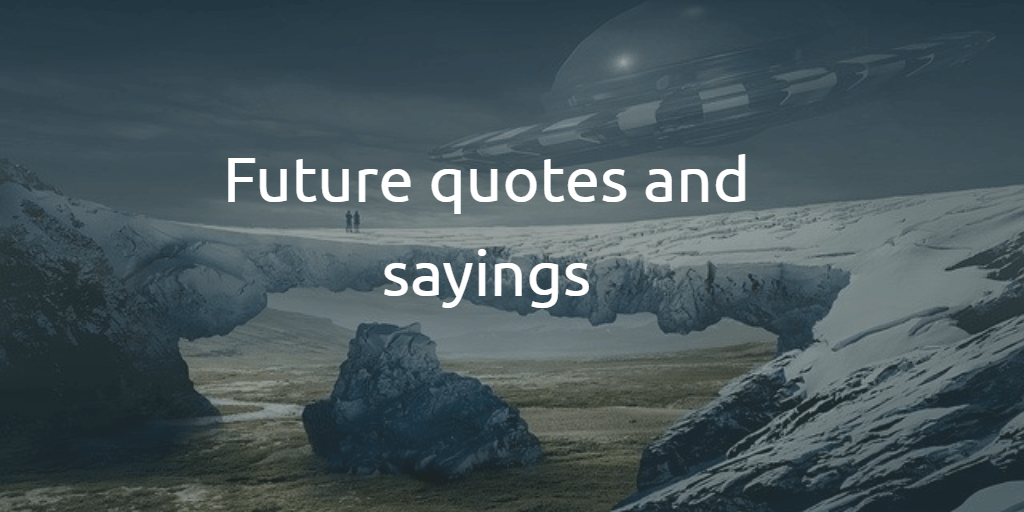 Future; That period of time in which our affairs prosper, our friends are true and our happiness is assured.
Ambrose Bierce

The best thing about the future is that it comes only one day at a time.
Abraham Lincoln

When it comes to the future, there are three kinds of people: those who let it happen, those who make it happen, and those who wonder what happened.
John M. Richardson, Jr.

I never think of the future. It comes soon enough.
Albert Einstein

The future will one day be the present and will seem as unimportant as the present does now.
W. Somerset Maugham

The future is made of the same stuff as the present.
Simone Weil

For tomorrow belongs to the people who prepare for it today.
African Proverb

I believe the future is only the past again, entered through another gate.
Arthur Wing Pinero

The future belongs to those who believe in the beauty of their dreams.
Eleanor Roosevelt

The future belongs to those who give the next generation reason for hope.
Pierre Teilhard de Chardin

The future is not a result of choices among alternative paths offered by the present, but a place that is created–created first in the mind and will, created next in activity. The future is not some place we are going to, but one we are creating.
Anonymous

The trouble with our times is that the future is not what it used to be.
Paul Valery

The future is an opaque mirror. Anyone who tries to look into it sees nothing but the dim outlines of an old and worried face.
Jim Bishop

Stop acting as if life is a rehearsal. Live this day as if it were your last. The past is over and gone. The future is not guaranteed.
Wayne Dyer

The longer you wait for the future, the shorter it will be.
Anonymous

The best way to predict the future is to invent it.
Alan Kay

The best way to predict the future is to create it.
Peter Drucker

The future is wider than vision, and has no end.
Donald G. Mitchell

The future, according to some scientists, will be exactly like the past, only far more expensive.
John Sladek

We should all be concerned about the future because we will have to spend the rest of our lives there.
Charles F. Kettering

Change is the law of life. And those who look only to the past or present are certain to miss the future.
John F. Kennedy

I look to the future because that’s where I’m going to spend the rest of my life.
George F. Burns

Whatever your past has been, you have a spotless future.
Anonymous

You can never plan the future by the past.
Edmund Burke

The future is a convenient place for dreams.
Anatole France

The future is something which everyone reaches at the rate of sixty minutes an hour, whatever he does, whoever he is.
C. S. Lewis

May the dreams of your past be the reality of your future.
Anonymous

I am not afraid of tomorrow, for I have seen yesterday and I love today.
William Allen White

The vast possibilities of our great future will become realities only if we make ourselves responsible for that future.
Gifford Pinchot

I have seen the future and it is very much like the present – only longer.
Kehlog Albran

The future is purchased by the present.
Samuel Johnson

The future is much like the present, only longer.
Dan Quisenberry

Never let the future disturb you. You will meet it, if you have to, with the same weapons of reason which today arm you against the present.
Marcus Aurelius

I know not what the future holds, but I know who holds the future.
Anonymous

The future is hidden even from those who make it.
Anatole France

A preoccupation with the future not only prevents us from seeing the present as it is but often prompts us to rearrange the past.
Eric Hoffer

With the past, I have nothing to do; nor with the future. I live now.
Ralph Waldo Emerson

When all else is lost, the future still remains.
Christian Nestell Bovee

As for the future, your task is not to foresee it, but to enable it.
Antoine de Saint-Exupery

The future is the past returning through another gate.
Arnold Glasgow

The future has a way of arriving unannounced.
George Will

I like the dreams of the future better than the history of the past.
Thomas Jefferson

He that fears not the future may enjoy the present.
Thomas Fuller

Prediction is very difficult, especially about the future.
Niels Bohr

I have but one lamp by which my feet are guided, and that is the lamp of experience. I know no way of judging of the future but by the past.
Edward Gibbon

The future belongs to those who prepare for it today.
Malcolm X

The future belongs to those who dare.
Anonymous

Your future takes precedence over your past. Focus on your future, rather than on the past.
Gary Ryan Blair

The past can’t see you, but the future is listening.
Destin Figuier

Nobody can predict the future but it’s worth trying to influence the direction.
Ron de Jonge

We need not be afraid of the future, for the future will be in our own hands.
Thomas E. Dewey

I do not want to foresee the future. I am concerned with taking care of the present. God has given me no control over the moment following.
Mohandas Gandhi

The future is not a gift – it is an achievement.
Harry Lauder