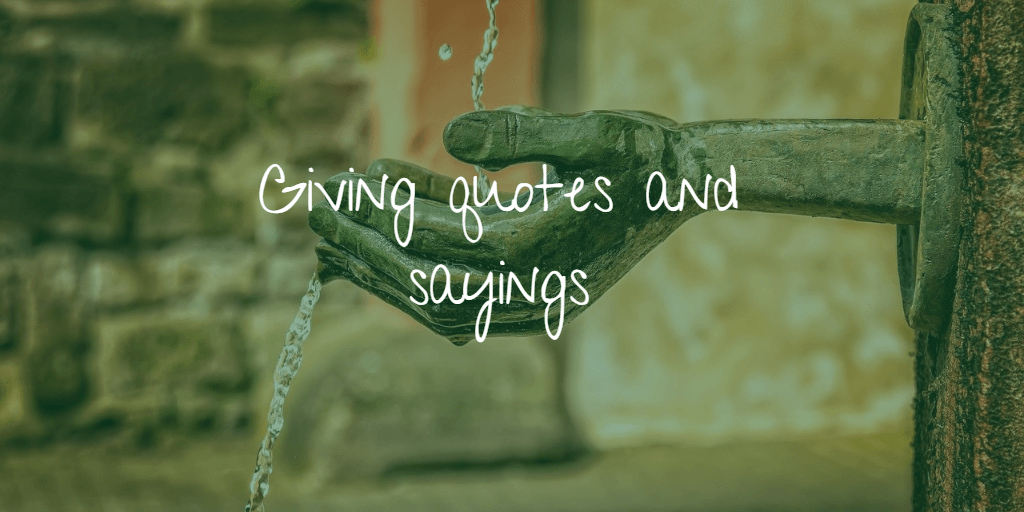 No one has ever become poor by giving.
Anne Frank

The value of a man resides in what he gives and not in what he is capable of receiving.
Albert Einstein

Think of giving not as a duty but as a privilege.
John D. Rockefeller Jr.

Giving frees us from the familiar territory of our own needs by opening our mind to the unexplained worlds occupied by the needs of others.
Barbara Bush

If you can’t feed a hundred people, then just feed one.
Mother Teresa

I have found that among its other benefits, giving liberates the soul of the giver.
Maya Angelou

There is no happiness in having or in getting, but only in giving.
Henry Drummond

They who give have all things; they who withhold have nothing.
Hindu Proverb

Giving is better than receiving because giving starts the receiving process.
Jim Rohn

It is better to give than receive- especially advice.
Mark Twain

Give what you have to somebody, it may be better than you think.
Henry Wadsworth Longfellow

You get the best out of others when you give the best of yourself.
Harvey S. Firestone

There is a wonderful mythical law of nature that the three things we crave most in life — happiness, freedom, and peace of mind — are always attained by giving them to someone else.
Peyton Conway March

Remember that the happiest people are not those getting more, but those giving more.
H. Jackson Brown, Jr.

The love we give away is the only love we keep.
Elbert Hubbard

It’s not how much we give but how much love we put into giving.
Mother Teresa

One can give without loving, but one cannot love without giving.
Amy Carmichael

You can’t get rid of poverty by giving people money.
P. J. O’Rourke

To give without any reward, or any notice, has a special quality of its own.
Anne Morrow Lindbergh

The mark of a true professional is giving more than you get.
Anonymous

For it is in giving that we receive.
St. Francis of Assisi

Don’t say that you want to give, but go ahead and give! You’ll never catch up with a mere hope.
Johann Wolfgang von Goethe

Did you know that there are gifts that will multiply your happiness when you give them away?
Steve Brunkhorst

Hands that give also receive.
Proverb

Giving is the lifeblood of happy living.
Todd Parrish

The excellence of a gift lies in its appropriateness rather than in its value.
Charles Dudley Warner

It’s important to give it all you have while you have the chance.
Shania Twain

Giving is more a dictate of the heart than a command of the brain.
Henry A. Rosso

It is every man’s obligation to put back into the world at least the equivalent of what he takes out of it.
Albert Einstein

You must give some time to your fellow men. Even if it’s a little thing, do something for others – something for which you get no pay but the privilege of doing it.
Albert Schweitzer

A man who gives his children habits of industry provides for them better than by giving them fortune.
Richard Whately

We must give more in order to get more. It is the generous giving of ourselves that produces the generous harvest.
Orison Swett Marden

Giving is most blessed and most acceptable when the donor remains completely anonymous.
Anonymous

When I chased after money, I never had enough. When I got my life on purpose and focused on giving of myself and everything that arrived into my life, then I was prosperous.
Wayne Dyer

Give to the world the best you have and the best will come back to you.
Madeline Bridges

What is called liberality is often merely the vanity of giving.
LA ROCHEFOUCAULD

Since you get more joy out of giving joy to others, you should put a good deal of thought into the happiness that you are able to give.
Eleanor Roosevelt

We do not quite forgive a giver. The hand that feeds us is in some danger of being bitten.
Ralph Waldo Emerson

The trick is to realize that after giving your best, there’s nothing more to give.
Sparky Anderson

What I spent I lost; what I possessed is left to others; what I gave away remains with me.
Joseph Addison

The ones that give, get back in kind.
Anonymous

The most satisfying thing in life is to have been able to give a large part of oneself to others.
Pierre Teilhard De Chardin

We are all gifted. That is our inheritance.
Ethel Waters

Giving pays the highest interest rate, and has the longest term, of any investment available.
Jeffrey K. Wilson

The great art of giving consists in this: the gift should cost very little and yet be greatly coveted, so that it may be the more highly appreciated.
Baltasar Gracian

Giving people self-confidence is by far the most important thing that I can do. Because then they will act.
Jack Welch

One must be poor to know the luxury of giving.
George Eliot

The Dead Sea is the dead sea, because it continually receives and never gives.
Anonymous

A kiss is something you cannot give without taking and cannot take without giving.
Anonymous

Love grows by giving. The love we give away is the only love we keep. The only way to retain love is to give it away.
Elbert Hubbard