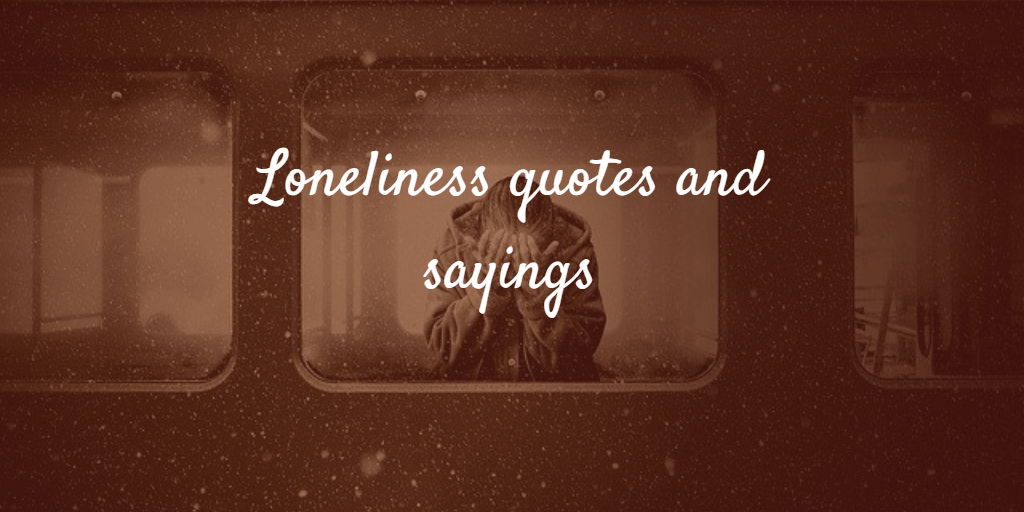 Loneliness and the feeling of being unwanted is the most terrible poverty.
Mother Teresa

The most terrible poverty is loneliness, and the feeling of being unloved.
Mother Teresa

We’re born alone, we live alone, we die alone. Only through our love and friendship can we create the illusion for the moment that we’re not alone.
Orson Welles

Loneliness is the most terrible poverty.
Mother Teresa

When we truly realize that we are all alone is when we need others the most.
Ronald Anthony

Pray that your loneliness may spur you into finding something to live for, great enough to die for.
Dag Hammarskjöld

Loneliness is never more cruel than when it is felt in close propinquity with someone who has ceased to communicate.
Germaine Greer

Life without a friend and a loved one can be crushingly lonely. Don’t let loneliness creep into your life. Open the gates of your heart and allow others to reach out to you. Soon a special someone may walk into your life and get rid of your loneliness.
Anonymous

Loneliness accepted becomes a gift leading one from a life dominated by tears to the discovery of one’s true self and finally to the heart of longing and the love of God.
Anonymous

Loneliness the clearest of crystal insight into your own soul, its the fear of one’s own self that haunts the lonely.
Keith Haynie

It is strange to be known so universally and yet to be so lonely.
Albert Einstein

Loneliness is about the scariest thing there is.
Anonymous

They are never alone that are accompanied with noble thoughts.
Sir Philip Sidney

If you are afraid of being lonely, don’t try to be right.
Jules Renard

Loneliness is part of being human. It reminds us that we are not complete in ourselves.
David Runcorn

It is usually expensive and lonely to be principled.
Paul Theroux

To be alone is the fate of all great minds – a fate deplored at times, but still always chosen as the less grievous of two evils.
Arthur Schopenhauer

Loneliness is the first thing which God’s eye named, not good.
John Milton

Loneliness is and always has been the central and inevitable experience of every man.
Thomas Wolfe

At the innermost core of all loneliness is a deep and powerful yearning for union with one’s lost self.
Brendan Francis Behan

Loneliness is the poverty of self; solitude is the richness of self.
May Sarton

With some people solitariness is an escape not from others but from themselves. For they see in the eyes of others only a reflection of themselves.
Eric Hoffer

Loneliness is the unloneliest feeling in the world, as everyone has experienced it.
Jarod Kintz

The whole conviction of my life now rests upon the belief that loneliness, far from being a rare and curious phenomenon, peculiar to myself and to a few other solitary men, is the central and inevitable fact of human existence.
Thomas Wolfe

People are lonely because they build walls instead of bridges.
Joseph F. Newton

It’s so lonely when you don’t even know yourself.
Anonymous

The worst loneliness is not to be comfortable with yourself.
Mark Twain

Nothing makes us so lonely as our secrets.
Paul Tournier

If you are lonely when you’re alone, you are in bad company.
Jean Paul Sartre

The lonely one offers his hand too quickly to whomever he encounters.
Friedrich Nietszche

Be good and you will be lonely.
Mark Twain

People drain me, even the closest of friends, and I find loneliness to be the best state in the union to live in.
Margaret Cho

Solitude is the profoundest fact of the human condition. Man is the only being who knows he is alone.
Octavio Paz

Inside myself is a place where I live all alone and that’s where you renew your springs that never dry up.
Pearl Buck

There is none more lonely than the man who loves only himself.
Abraham Ibn Esra

It is far better to be alone, than to be in bad company.
George Washington

No one ever discovers the depths of his own loneliness.
Georges Bernanos

Lonely people, in talking to each other can make each other lonelier.
Lillian Hellman

I’ve also seen that great men are often lonely. This is understandable, because they have built such high standards for themselves that they often feel alone. But that same loneliness is part of their ability to create.
Yousuf Karsh

The dread of loneliness is greater than the fear of bondage, so we get married.
Cyril Connolly

Man’s loneliness is but his fear of life.
Eugene O’Neill

When everyone leaves you it’s loneliness you feel, when you leave everyone else it’s solitude.
Alfred Polgar

Loneliness can be conquered only by those who can bear solitude.
Paul Tillich

Loneliness is proof that your innate search for connection is intact.
Martha Beck

It would do the world good if every man would compel himself occasionally to be absolutely alone. Most of the world’s progress has come out of such loneliness.
Bruce Barton

The surest cure for vanity is loneliness.
Thomas Wolfe

There is no loneliness greater than the loneliness of a failure. The failure is a stranger in his own house.
Eric Hoffer

The walls we build around us to keep sadness out also keeps out the joy.
Jim Rohn

A lonely sad soul can kill quicker than a germ.
John Steinbeck

My heart is a lonely hunter that hunts on a lonely hill.
Fiona Macleod

When we cannot bear to be alone, it means we do not properly value the only companion we will have from birth to death – ourselves.
Eda LeShan

The worst thing about loneliness is that it brings one face to face with oneself.
Mary Balogh